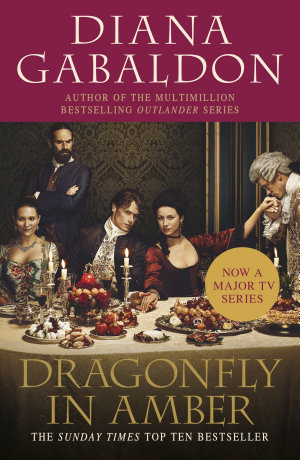 THE SECOND NOVEL IN THE BESTSELLING OUTLANDER SERIES - now a major new TV series. For twenty years Claire Randall has kept her secrets. But now she is returning with her grown daughter to the majesty of Scotland's mist-shrouded hills. Here Claire plans to reveal a truth as stunning as the events that gave it birth: about the mystery of an ancient circle of standing stones, about a love that transcends the boundaries of time, and about James Fraser, a warrior whose gallantry once drew the young Claire from the security of her century to the dangers of his. Now a legacy of blood and desire will test her beautiful daughter as Claire's spellbinding journey continues in the intrigue-ridden court of Charles Edward Stuart, in a race to thwart a doomed uprising, and in a desperate fight to save both the child and the man she loves.

Dragonfly In Amber: A Great Summary And Analysis! Dragonfly In Amber is the second book in Outlander book series, written by American writer Diana Gabaldon. Gabaldon was born in January 11th, 1952 in Arizona. She is famous for her Outlander series, which began writing in 1991. She grew up in a town of Flagstaff, Arizona, with her mother Jacqueline Sykes and her father Tony Gabaldon. Gabaldon's writing career began back in 1988, when she decided to write one short novel, a historical novel. Dragonfly in Amber is a book, which is centered around time-travelling plot, which involves Claire Randall, who is nurse from 20th century and her husband from 18th century Jamie Fraser, who is Scottish Highlander. The book is written as a combination of historical fiction, romance, adventure and science fiction as this novel follows attempts of Claire and Jamie to prevent the Jacobite rising, which, if successful, will end up a disaster for the Scots. Somewhat unusual and uncommon genre, Dragonfly in Amber draws its attention with the mixture of many genres, exciting plot and passionate characters. Even though it is written in seven hundred and fifty two pages, novel is considered to be easy to read, because it is filled with events, which will keep its readers interested until they read it to the end. Here Is A Preview Of What You Will Get: In Dragonfly In Amber, you will get a detailed summary of the novel In Dragonfly In Amber, you will find some analysis to strengthen your knowledge about the book In Dragonfly In Amber, you will get some fun multiple choice quizes, along with answers to help you learn about the novel. Get a copy, and learn everything about Dragonfly In Amber .

Dragonfly in Amber TV Tie In 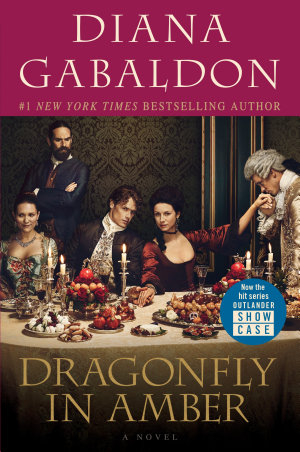 GET BOOK
Dragonfly in Amber TV Tie In Book Description:

Now repackaged with official tie-in art from the blockbuster Showtime series Outlander, which will air a second season beginning in 2016, based on Dragonfly in Amber, book 2 in the Outlander series. The second book in Diana Gabaldon's Outlander series, in which Claire Randall is reunited in Scotland with James Fraser, and the two travel to Paris to prevent the impending Jacobite rising.

The Outlander Series Bundle Books 1 2 3 and 4 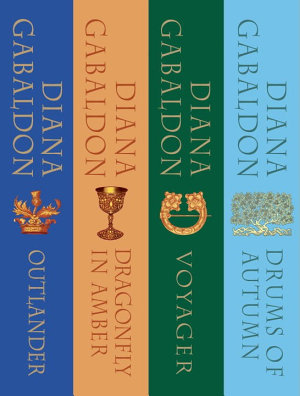 GET BOOK
The Outlander Series Bundle Books 1 2 3 and 4 Book Description:

There’s never been a better time to discover the novels behind the blockbuster Starz original series Outlander. Blending rich historical fiction with riveting adventure and a truly epic love story, here are the first four books of Diana Gabaldon’s New York Times bestselling saga that introduced the world to the brilliant Claire Randall and valiant Highlander Jamie Fraser: OUTLANDER DRAGONFLY IN AMBER VOYAGER DRUMS OF AUTUMN Scottish Highlands, 1945. Claire Randall, a former British combat nurse, is just back from the war and reunited with her husband on a second honeymoon when she walks through a standing stone in one of the ancient circles that dot the British Isles. Suddenly she is a Sassenach—an “outlander”—in a Scotland torn by war and raiding clans in the year of Our Lord . . . 1743. Claire is catapulted into the intrigues of a world that threatens her life, and may shatter her heart. Marooned amid danger, passion, and violence, her only chance of safety lies in Jamie Fraser, a gallant young Scots warrior. What begins in compulsion becomes urgent need, and Claire finds herself torn between two very different men, in two irreconcilable lives. Praise for Diana Gabaldon’s Outlander novels “Marvelous and fantastic adventures, romance, sex . . . perfect escape reading.”—San Francisco Chronicle, on Outlander “History comes deliciously alive on the page.”—New York Daily News, on Outlander “Gabaldon is a born storyteller. . . . The pages practically turn themselves.”—The Arizona Republic, on Dragonfly in Amber “Triumphant . . . Her use of historical detail and a truly adult love story confirm Gabaldon as a superior writer.”—Publishers Weekly, on Voyager “Unforgettable characters . . . richly embroidered with historical detail.”—The Cincinnati Post, on Drums of Autumn 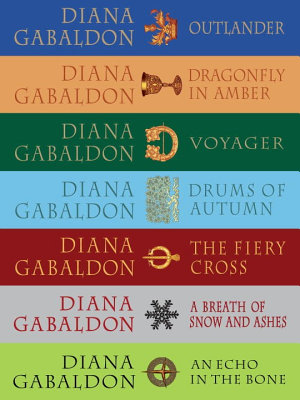 Diana Gabaldon’s acclaimed Outlander series blends rich historical fiction with riveting adventure and a truly epic love story. Now, with this convenient seven-volume eBook bundle, discover the novels that have won Gabaldon millions of fans and introduced readers to the brilliant Claire Randall and valiant Highlander Jamie Fraser. “Great fun . . . marvelous and fantastic adventures, romance, sex . . . perfect escape reading.”—San Francisco Chronicle, on Outlander The year is 1946. Claire Randall is a British ex-combat nurse on a postwar second honeymoon with her husband in the Scottish Highlands. Walking alone one afternoon, she passes through a circle of standing stones and is hurled back in time to a Scotland simmering with war in the year of our Lord 1743. Catapulted into an intrigue of rival clans and rising armies that threatens her life, she’s obliged to wed Jamie Fraser, a gallant young Scots warrior, as the only way to survive. Thus begins a series of unrivaled storytelling that has become a modern classic. This bundle includes: OUTLANDER DRAGONFLY IN AMBER VOYAGER DRUMS OF AUTUMN THE FIERY CROSS A BREATH OF SNOW AND ASHES AN ECHO IN THE BONE “Diana Gabaldon is a born storyteller . . . the pages practically turn themselves.”—The Arizona Republic, on Dragonfly in Amber “A feast for ravenous readers of eighteenth-century Scottish history, heroism, and romance.”—Kirkus Reviews, on Outlander

The Outlandish Companion Revised and Updated 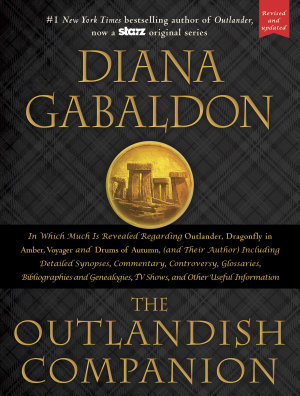 GET BOOK
The Outlandish Companion Revised and Updated Book Description:

Perfect for readers of the bestselling Outlander novels—and don’t miss The Outlandish Companion Volume Two! #1 New York Times bestselling author Diana Gabaldon has captivated millions of readers with her critically acclaimed Outlander novels, the inspiration for the Starz original series. From the moment Claire Randall stepped through a standing stone circle and was thrown back in time to the year 1743—and into a world that threatens life, limb, loyalty, heart, soul, and everything else Claire has—readers have been hungry to know everything about this world and its inhabitants, particularly a Scottish soldier named Jamie Fraser. In this beautifully illustrated compendium of all things Outlandish, Gabaldon covers the first four novels of the main series, including: • full synopses of Outlander, Dragonfly in Amber, Voyager, and Drums of Autumn • a complete listing of the characters (fictional and historical) in the first four novels in the series, as well as family trees and genealogical notes • a comprehensive glossary and pronunciation guide to Gaelic terms and usage • The Gabaldon Theory of Time Travel, explained • frequently asked questions to the author and her (sometimes surprising) answers • an annotated bibliography • essays about medicine and magic in the eighteenth century, researching historical fiction, creating characters, and more • professionally cast horoscopes for Jamie and Claire • the making of the TV series: how we got there from here, and what happened next (including “My Brief Career as a TV Actor”) • behind-the-scenes photos from the Outlander TV series set For anyone who wants to spend more time with the Outlander characters and the world they inhabit, Diana Gabaldon here opens a door through the standing stones and offers a guided tour of what lies within. 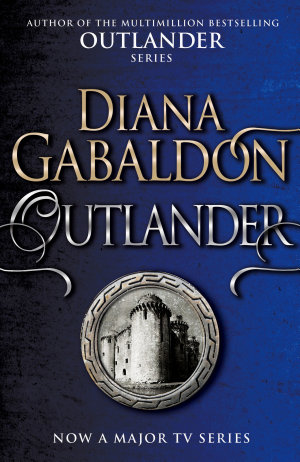 THE FIRST NOVEL IN THE BESTSELLING OUTLANDER SERIES. As seen on Amazon Prime TV. What if your future was the past? 1946, and Claire Randall goes to the Scottish Highlands with her husband Frank. It’s a second honeymoon, a chance to learn how war has changed them and to re-establish their loving marriage. But one afternoon, Claire walks through a circle of standing stones and vanishes into 1743, where the first person she meets is a British army officer - her husband’s six-times great-grandfather. Unfortunately, Black Jack Randall is not the man his descendant is, and while trying to escape him, Claire falls into the hands of a gang of Scottish outlaws, and finds herself a Sassenach - an outlander - in danger from both Jacobites and Redcoats. Marooned amid danger, passion and violence, her only chance of safety lies in Jamie Fraser, a gallant young Scots warrior. What begins in compulsion becomes urgent need, and Claire finds herself torn between two very different men, in two irreconcilable lives. (Previously published as Cross Stitch) 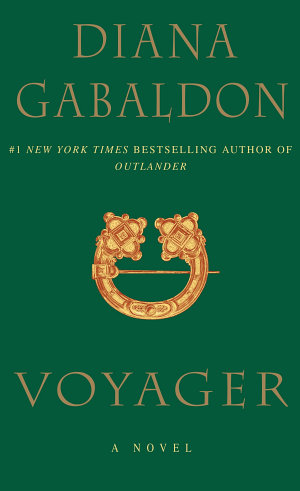 Time-travelling Claire Randall returns to her own time, pregnant and weary, and resumes her life, but her memories of her eighteenth-century Scottish lover Jamie Fraser will not die, leading her to a desperate decision to return to him

The Outlander Series Bundle Books 5 6 7 and 8 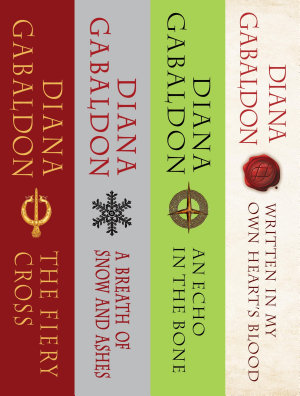 GET BOOK
The Outlander Series Bundle Books 5 6 7 and 8 Book Description:

As their story is told on the hit Starz series, the unforgettable adventures of steadfast Highland warrior Jamie Fraser and time-traveling Englishwoman Claire Randall continue in the ongoing Outlander novels. This eBook bundle includes the fifth, sixth, seventh, and eighth books in the series: THE FIERY CROSS A BREATH OF SNOW AND ASHES AN ECHO IN THE BONE WRITTEN IN MY OWN HEART’S BLOOD The year is 1771, and war is coming. Jamie Fraser’s wife tells him so. Little as he wishes to, he must believe it, for hers is a gift of dreadful prophecy—a time-traveler’s certain knowledge. Claire’s unique view of the future has brought him both danger and deliverance in the past. Her knowledge of the oncoming revolution is a flickering torch that may light his way through the perilous years ahead—or ignite a conflagration that will leave their lives in ashes. Praise for Diana Gabaldon’s Outlander novels “Marvelous and fantastic adventures, romance, sex . . . perfect escape reading.”—San Francisco Chronicle, on Outlander “History comes deliciously alive on the page.”—New York Daily News, on Outlander “A grand adventure written on a canvas that probes the heart, weighs the soul and measures the human spirit across [centuries].”—CNN, on The Fiery Cross “The large scope of the novel allows Gabaldon to do what she does best, paint in exquisite detail the lives of her characters.”—Booklist, on A Breath of Snow and Ashes “Features all the passion and swashbuckling that fans of this historical fantasy series have come to expect.”—People, on Written in My Own Heart’s Blood

A Critical Study of Self-help and Self-improvement Practices