No Friend But the Mountains

GET BOOK
No Friend But the Mountains Book Description:

"Our government jailed his body, but his soul remained that of a free man." -- From the Foreword by Man Booker Prize-winning author Richard Flanagan In 2013, Kurdish-Iranian journalist Behrouz Boochani was illegally detained on Manus Island, a refugee detention centre off the coast of Australia. He has been there ever since. This book is the result. Laboriously tapped out on a mobile phone and translated from the Farsi. It is a voice of witness, an act of survival. A lyric first-hand account. A cry of resistance. A vivid portrait of five years of incarceration and exile. Winner of the Victorian Premier's Prize for Literature, Australia's richest literary prize, No Friend But the Mountains is an extraordinary account -- one that is disturbingly representative of the experience of the many stateless and imprisoned refugees and migrants around the world.

No Friend But the Mountains 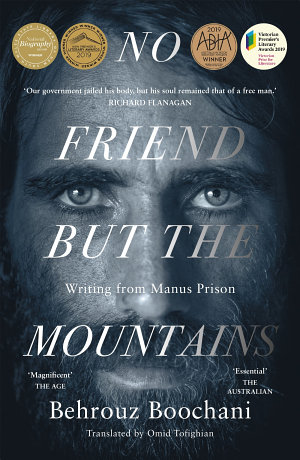 GET BOOK
No Friend But the Mountains Book Description:

WINNER OF THE VICTORIAN PREMIER'S LITERARY PRIZE FOR LITERATURE AND FOR NON-FICTION 2019 Where have I come from? From the land of rivers, the land of waterfalls, the land of ancient chants, the land of mountains... In 2013, Kurdish journalist Behrouz Boochani was illegally detained on Manus Island. People would run to the mountains to escape the warplanes and found asylum within their chestnut forests... This book is the result. Laboriously tapped out on a mobile phone and translated from the Farsi. It is a voice of witness, an act of survival. A lyric first-hand account. A cry of resistance. A vivid portrait through six years of incarceration and exile. Do Kurds have any friends other than the mountains? WINNER OF THE NSW PREMIER'S AWARD 2019 WINNER OF THE ABIA GENERAL NON-FICTION BOOK OF THE YEAR 2019 WINNER OF THE NATIONAL BIOGRAPHY AWARD 2019 INAUGURAL WINNER OF THE BEHROUZ BOOCHANI AWARD FOR SERVICES TO ANTHROPOLOGY FINALIST FOR THE TERZANI PRIZE 2020 LONGLISTED FOR THE COLIN RODERICK LITERARY AWARD 2019 PRAISE FOR NO FRIEND BUT THE MOUNTAINS 'Our government jailed his body, but his soul remained that of a free man.' RICHARD FLANAGAN 'The most important Australian book published in 2018.' ROBERT MANNE 'A powerful account ... made me feel ashamed and outraged. Behrouz's writing is lyrical and poetic, though the horrors he describes are unspeakable' SOFIE LAGUNA 'A poetic, yet harrowing read, and every Australian household should have a copy.' MAXINE BENEBA CLARKE 'A chant, a cry from the heart, a lament, fuelled by a fierce urgency, written with the lyricism of a poet, the literary skills of a novelist, and the profound insights of an astute observer of human behaviour and the ruthless politics of a cruel and unjust imprisonment.' ARNOLD ZABLE 'A shattering book every Australian should read' Benjamin Law (@mrbenjaminlaw 01/02/2019) 'A magnificent writer. To understand the true nature of what it is that we have done, every Australian, beginning with the prime minister, should read Behrouz Boochani's intense, lyrical and psychologically perceptive prose-poetry masterpiece.' The Age 'He immerses the reader in Manus' everyday horrors: the boredom, frustration, violence, obsession and hunger; the petty bureaucratic bullying and the wholesale nastiness; the tragedies and the soul-destroying hopelessness. Its creation was an almost unimaginable task... will lodge deep in the brain of anyone who reads it.' Herald Sun 'Boochani has defied and defeated the best efforts of Australian governments to deny asylum seekers a face and a voice. And what a voice: poetic yet unsentimental, acerbic yet compassionate, sorrowful but never self-indulgent, reflective and considered even in anger and despair. ... It may well stand as one of the most important books published in Australia in two decades, the period of time during which our refugee policies have hardened into shape - and hardened our hearts in the process.' SATURDAY PAPER 'An essential historical document.' Weekend Australian 'In the absence of images, turn to this book to fathom what we have done, what we continue to do. It is, put simply, the most extraordinary and important book I have ever read.' Good Reading Magazine (starred review) 'Brilliant writing. Brilliant thinking. Brilliant courage.' Professor Marcia Langton AM (@marcialangton 01/02/2019) 'Segues effortlessly between prose and poetry, both equally powerful.' Australian Financial Review 'Boochani has woven his own experiences in to a tale which is at once beautiful and harrowing, creating a valuable contribution to Australia's literary canon.' Writing NSW

No Friends but the Mountains 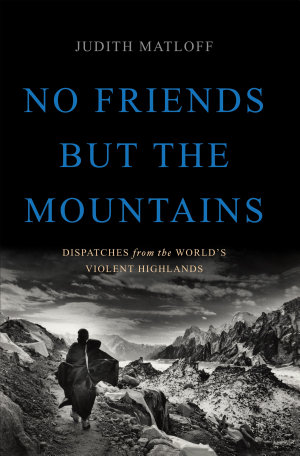 GET BOOK
No Friends but the Mountains Book Description:

A veteran war correspondent journeys to remote mountain communities across the globe-from Albania and Chechnya to Nepal and Colombia-to investigate why so many conflicts occur at great heights Mountainous regions are home to only ten percent of the world's population yet host a strikingly disproportionate share of the world's conflicts. Mountains provide a natural refuge for those who want to elude authority, and their remoteness has allowed archaic practices to persist well into our globalized era. As Judith Matloff shows, the result is a combustible mix we in the lowlands cannot afford to ignore. Traveling to conflict zones across the world, she introduces us to Albanian teenagers involved in ancient blood feuds; Mexican peasants hunting down violent poppy growers; and Jihadists who have resisted the Russian military for decades. At every stop, Matloff reminds us that the drugs, terrorism, and instability cascading down the mountainside affect us all. A work of political travel writing in the vein of Ryszard Kapuscinski and Robert Kaplan, No Friends but the Mountains is an indelible portrait of the conflicts that have unexpectedly shaped our world.

No Friends But the Mountains 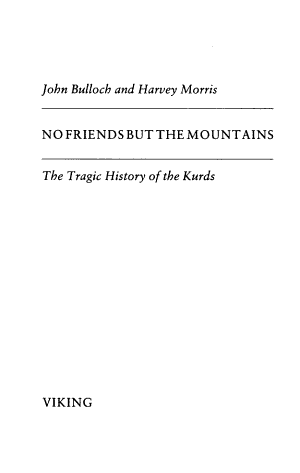 GET BOOK
No Friends But the Mountains Book Description:

We Have No Friends But the Mountains 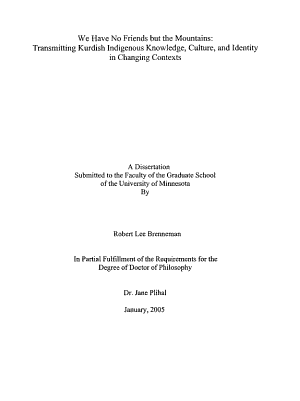 GET BOOK
We Have No Friends But the Mountains Book Description: 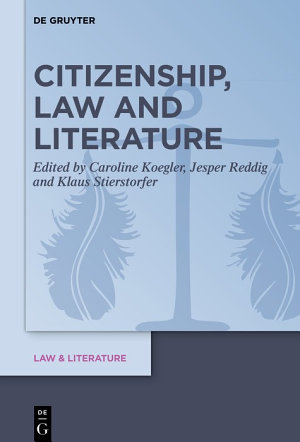 This edited volume is the first to focus on how concepts of citizenship diversify and stimulate the long-standing field of law and literature, and vice versa. Building on existing research in law and literature as well as literature and citizenship studies, the collection approaches the triangular relationship between citizenship, law and literature from a variety of disciplinary, conceptual and political perspectives, with particular emphasis on the performative aspect inherent in any type of social expression and cultural artefact. The sixteen chapters in this volume present literature as carrying multifarious, at times opposing energies and impulses in relation to citizenship. These range from providing discursive arenas for consolidating, challenging and re-negotiating citizenship to directly interfering with or inspiring processes of law-making and governance. The volume opens up new possibilities for the scholarly understanding of citizenship along two axes: Citizenship-as-Literature: Enacting Citizenship and Citizenship-in-Literature: Conceptualising Citizenship.

In The Shoes of the Other 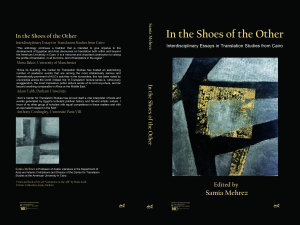 GET BOOK
In The Shoes of the Other Book Description:

In the Shoes of the Other Interdisciplinary Essays in Translation Studies from Cairo “This anthology continues a tradition that is intended to give impetus to the development of Egyptian and Arab discourses on translation both within and beyond the American University in Cairo. It is a welcome and important contribution to raising the profile of translation, in all its forms, and of translators in the region.” Mona Baker, University of Manchester “Since its founding, the Center for Translation Studies has hosted an astonishing number of academic events that are among the most intellectually serious and internationally prominent of AUC’s activities in the humanities; this has been noted by universities across the world. Indeed, the “In Translation” lecture series is, without any exaggeration, the most impressive public lecture series of its kind anywhere, and far beyond anything comparable in Africa or the Middle East.” Adam Talib, Durham University “AUC’s Center for Translation Studies has proved itself a vital interpreter of texts and events generated by Egypt’s turbulent political history and fervent artistic culture. I know of no other group of scholars with equal competence in these matters and with an equivalent respect in the field.” Anthony Cordingley, Université Paris VIII 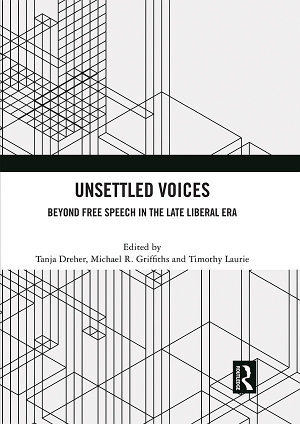 From resurgent racisms to longstanding Islamophobia, from settler colonial refusals of First Nations voices to border politics and migration debates, ‘free speech’ has been weaponised to target racialized communities and bolster authoritarian rule. Unsettled Voices identifies the severe limitations and the violent consequences of ‘free speech debates’ typical of contemporary cultural politics, and explores the possibilities to combat racism when liberal values underpin emboldened white supremacy. What kind of everyday racially motivated speech is protected by such an interpretation of liberal ideology? How do everyday forms of social expression that vilify and intimidate find shelter through an inflation of the notion of freedom of speech? Furthermore, how do such forms refuse the idea that language can be a performative act from which harm can be derived? Racialized speech has conjured and shaped the subjectivities of multiple intersecting participants, reproducing new and problematic forms of precarity. These vulnerabilities have been experienced from the sound of rubber bullets in the Occupied Palestinian Territories to UK hate speech legislation, to the spontaneous performace of a First Nations war dance on the Australian Rules football pitch. This book identifies the deep limitations and the violent consequences of the longstanding and constantly developing ‘free speech debates’ typical of so many contexts in the West, and explores the possibilities to combat racism when liberal values are ‘weaponized’ to target racialized communities. This book was originally published as a special issue of Continuum: Journal of Media & Cultural Studies.

Handbook of Migration and Global Justice 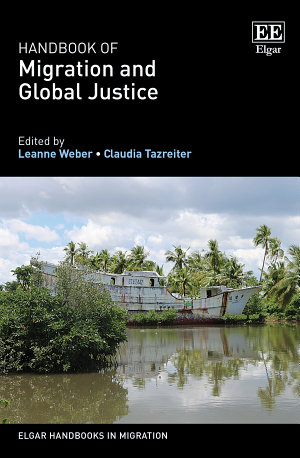 GET BOOK
Handbook of Migration and Global Justice Book Description:

This timely Handbook brings together leading international scholars from a range of disciplinary backgrounds and geopolitical perspectives to interrogate the intersections between migration and global justice. It explores how cross-border mobility and migration have been affected by rapid economic, cultural and technological globalisation, addressing the pressing questions of global justice that arise as governments respond to unprecedented levels of global migration.

Translating and Interpreting in Australia and New Zealand 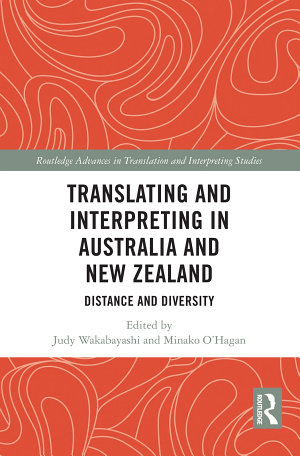 GET BOOK
Translating and Interpreting in Australia and New Zealand Book Description:

This volume explores Australian and New Zealand experiences of translation and interpreting (T&I), with a special focus on the formative impact of geocultural contexts. Through the critical lenses of practitioners, scholars and related professionals working in and on these two countries, the contributors seek a better understanding of T&I practices and discourses in this richly multilingual and multicultural region. Building on recent work in translation and interpreting studies that extends attention to sites outside of Europe and the Americas, this volume considers the geocultural and geopolitical factors that have helped shape T&I in these Pacific neighbours, especially how the practices and conceptualization of T&I have been closely tied with immigration. Contributors examine the significant role T&I plays in everyday communication across varied sectors, including education, health, business, and legal contexts, as well as in crisis situations, cultural and creative settings, and initiatives to revitalize Indigenous languages. The book also looks to the broader implications beyond the Australian and New Zealand translationscape, making it of relevance to T&I scholars elsewhere, as well as those with an interest in Indigenous studies and minority languages.