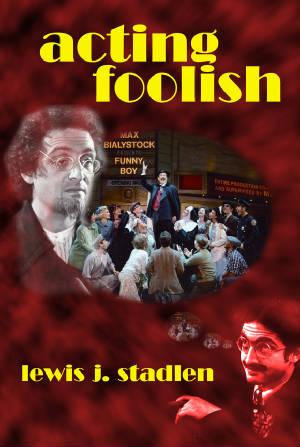 Lewis J. Stadlen made his Broadway debut as Groucho Marx in the musical comedy Minnie's Boys (1970). His other noted Broadway roles include Senex in A Funny Thing Happened On The Way To The Forum, Banjo in a revival of The Man Who Came to Dinner, Milt in Laughter on the 23rd Floor, and Dr. Pangloss in the 1973 production of Candide. He was nominated for three Tony awards over the years. Stadlen's film credits include Portnoy's Complaint, Serpico, The Verdict, To Be or Not to Be, Windy City, and In & Out. On television, Stadlen had a regular role in the first season of Benson. He also has appeared in Law & Order and The Sopranos. When someone asks him what he does for a living, he tells them, “I entertain people." About his autobiography, he explains, “Calling myself an actor would be too immodest. Rarely do I spare them the anarchic and usually hilarious accounts of what it has been like to survive for forty one years in the movies, television, and my first love, the American Theater. During that time I have persevered through a minefield of theatrical personalities, not excluding my parents, in order to emerge the man I am today: a closet optimist, easily fooled, addicted to tall sexy women and serious enough to make thousands of people laugh at any given time (as long as I have the right material). “My autobiography explores my journey with the people I have been blessed to be associated with. Zero Mostel, Neil Simon, Groucho Marx, Nathan Lane, Joseph Papp, David Burns, Harold Prince, Sidney Lumet, Rita Moreno, Mickey Rooney, Agnes DeMille, Henry Fonda, Mel Brooks, Richard Dreyfuss, Stella Adler, Sam Levene and Alan Arkin all have in common the blessing and curse of being born with the creative gene. Their’s is a life where only a degree of politeness is advisable. Everytime you think you've seen it all, you are reminded you will always be a virgin. This book is the story of larger-than-life people, who have dedicated their lives to telling the story well. How it's done isn’t always pretty, but to quote the great Stella Adler, “It's better to be interesting than be real.”