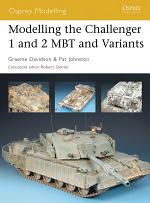 Modelling the Challenger 1 and 2 MBT and Variants

Authors: Graeme Davidson, Pat Johnston
Categories: History
Introduced to the British Army in 1983, Challenger Main Battle Tanks have served operationally in the Balkans and both Gulf Wars, where their firepower, protection and shock action were instrumental to the success of British forces. In addition to the familiar gun tanks, the Challenger family encompasses the Rhino Armoured

Authors: Dick Taylor
Categories: History
Challenger 2 (CR2) is the British Army's main battle tank. CR2 is based on the Challenger 1 tank, which served with distinction on operations in the Gulf War and the Balkans. Although a logical development of Challenger 1, CR2 is greatly superior. It is protected by second generation Chobham Armour

Authors: Simon Dunstan
Categories: History
The Challenger 2 is the current Main Battle Tank of the British Army and represents the culmination of 80 years of tank design. In 1987, its design was presented to the Ministry of Defence in response to a requirement to replace the Chieftain MBT that had been partially superseded by