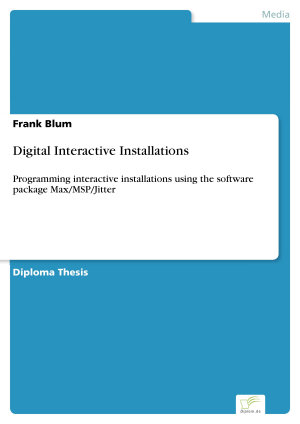 Inhaltsangabe:Abstract: The arts have always been influenced by new evolving technologies. A certain aesthetic turning point was brought about by the silent ‘algorithmic revolution’ we have not hardly noticed, as the curators of the Centre of Art and Media (ZKM) in Karlsruhe, Germany, propose with their current exhibition. At present, barely any part of social life is not influenced by these decision-making processes (algorithms) habitually executed by our computer devices. The radical changes this revolution causes for all of us are incalculable. However, we should not forget that algorithms, a well-defined set of technical instructions with a finite number of rules designed to solve a specific problem, have been incorporated as a creative instrument in the work of Albrecht D ̈urer and other artists since the late middle ages. The strict application of algorithms in art ultimately led to works explicitly integrating the recipient into the creative process, eventually culminating in the new media arts. Today’s art practices transform observers into users. Emerging with the changing paradigm is a new type of creator of cultural artefacts. This has been accompanied now for more than two decades by a fruitful collaborative atmosphere between the formerly strictly separated traditions of art and science. More often than not artists like such as the pioneers Christa Sommerer, Laurent Mignonneau, and Jeffrey Shaw are at the same time scientific researchers found in institutional laboratories as heads of larger teams which include programmers, engineers and scientists of various different disciplines. They develop new hard- and software technologies themselves. All in all this development places not only an inestimable number of creative tools in the hands of the artist, but a highly dynamic and hybrid field that forms new areas like telepresence art, biocybernetic art, robotics, Net art, space art, experiments in nanotechnology, artificial or A-life art, creating virtual agents and avatars, datamining, mixed realities and database- supported art, which all explore the technologies of tomorrow. Not long ago, artists sought to explore software coding as the foundation of their expression and as a ‘material’ with specific properties. Like Max/MSP and others, new alternative programming environments based on a graphical interface concept facilitate bridging the gap between art and technology, and bring the artists back more control over the creative [...] 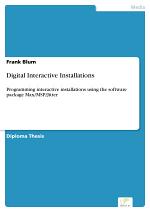 Authors: Frank Blum
Categories: Technology & Engineering
Inhaltsangabe:Abstract: The arts have always been influenced by new evolving technologies. A certain aesthetic turning point was brought about by the silent ‘algorithmic revolution’ we have not hardly noticed, as the curators of the Centre of Art and Media (ZKM) in Karlsruhe, Germany, propose with their current exhibition. At present, 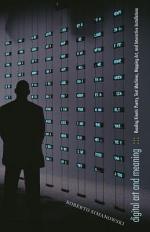 Authors: Roberto Simanowski
Categories: Art
How to interpret and critique digital arts, in theory and in practice. 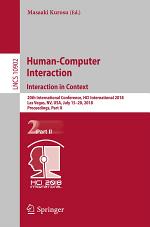 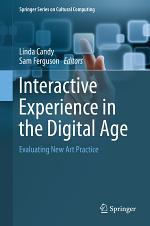 Interactive Experience in the Digital Age

Authors: Linda Candy, Sam Ferguson
Categories: Computers
The use of interactive technology in the arts has changed the audience from viewer to participant and in doing so is transforming the nature of experience. From visual and sound art to performance and gaming, the boundaries of what is possible for creation, curating, production and distribution are continually extending.