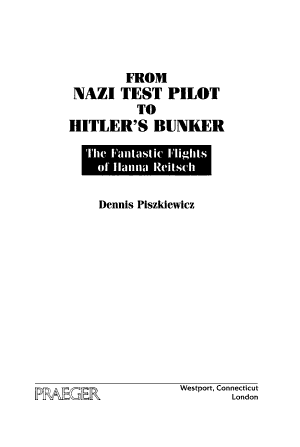 This is the amazing story of Hanna Reitsch, one of the most celebrated women of the Third Reich. As a decorated test pilot for the Luftwaffe and a protege of Hitler, Reitsch was one of a handful of women who achieved personal success by breaking from the traditionally defined role of wife and mother in Nazi Germany. Reitsch's skills and accomplishments ultimately earned her an Iron Cross and celebrity status. A witness to the last days of the Third Reich, Reitsch visited Hitler's Berlin bunker where she received orders to deliver letters designed to rally the Luftwaffe. She left on this futile mission only minutes before Hitler's marriage to Eva Braun. This is the amazing story of Hanna Reitsch, a woman who excelled in an environment that for most was extremely repressive--Germany before and during World War II. She achieved personal success when she escaped the culturally defined role of wife and mother in Nazi Germany to live her passion for flying. Reitsch began her career flying gliders, setting both distance and endurance records in the 1930s. As the war approached she became a test pilot for new and dangerous aircraft for the Luftwaffe. The aircraft she flew included a large number of gliders and military aircraft, including Focke-Achgelis FW 61 Hubschrauber (the first practical helicopter), the jet-powered piloted version of the V-1 buzz bomb, and the rocket-powered Messerschmitt 163. Her achievements as a test pilot made her a celebrity in Nazi Germany and earned her an Iron Cross and the friendship of Hitler. As a friend of the Fuehrer, she became an eyewitness to the fall of the Third Reich. In the final days of World War II, she flew with her friend and lover, Luftwaffe General Robert Ritter von Greim--to join Hitler in his bunker. Minutes before Hitler was to marry Eva Braun, Reitsch and von Greim--on Hitler's orders--flew from Berlin to Rechlin in a desperate attempt to rally the Luftwaffe and save the Reich. After the war, Reitsch was interviewed as a potential witness for the Nuremberg War Crimes Trials. Her interviewer stated that [Hanna's] account of the flight into Berlin to report to Hitler and of her stay in the Fuehrer's bunker is probably as accurate a one as will be obtained of those last days. It has remained so for half a century. This book also recounts a vivid and remarkable encounter in a cemetery in Kitzbuehel, Austria, in June of 1945, between Leni Riefenstahl, the filmmaker, perhaps the only other woman to be so successful in the Third Reich, and Hanna Reitsch. During this chance encounter, Hanna shows the letters of Josef and Magda Goebbels to Riefenstahl and the reader shares their shocking contents. Hanna Reitsch found in the Nazi establishment opportunities and rewards for her achievements. Consorting with the devil paid well; yet, in the end, she was called on to pay back more than she had received. Her story shows how hard it is for a woman to excel in a repressive society, and how that success can lead to defeat and misery. 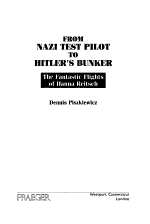 Authors: Dennis Piszkiewicz
Categories: Transportation
This is the amazing story of Hanna Reitsch, one of the most celebrated women of the Third Reich. As a decorated test pilot for the Luftwaffe and a protege of Hitler, Reitsch was one of a handful of women who achieved personal success by breaking from the traditionally defined role 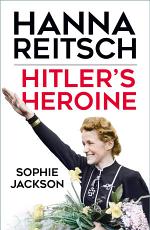 Authors: Sophie Jackson
Categories: History
Hanna Reitsch longed to fly. Breaking records and earning the respect of the Nazi regime, she became the first female Luftwaffe test pilot, earning significant awards and becoming a personal heroine of Hitler’s. Reitsch was an ardent Nazi and was prepared to die for the cause, first as a test 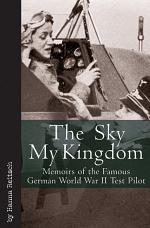 The Sky My Kingdom

Authors: Hanna Reitsch
Categories: Biography & Autobiography
The memoir of the female aviator who became Hitler’s favorite pilot. The Sky My Kingdom is the fascinating autobiography of the famous World War II test pilot Hanna Reitsch. As the war progressed, Reitsch was invited to fly many of Germany’s latest—and increasingly desperate—designs, including the rocket-propelled Messerschmitt Me 163 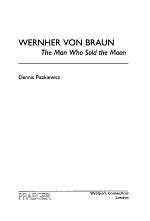 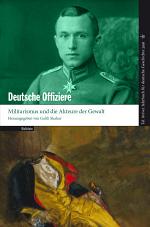