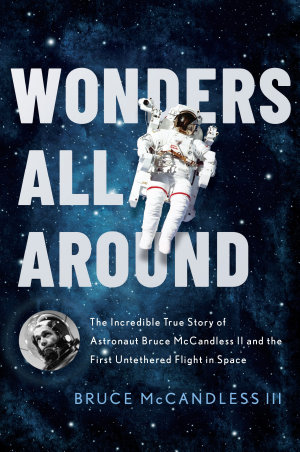 GET BOOK
Wonders All Around Book Description:

The Man You Never Knew You Knew It’s one of the most powerful and popular images in the history of space exploration: an astronaut in a snow-white spacesuit, untethered and floating alone in an expanse of blue. Bruce McCandless II is the man in that spacesuit, and Wonders All Around: The Incredible True Story of Astronaut Bruce McCandless II and the First Untethered Flight in Space is the thoroughly engrossing, extensively researched story of his inspiring life and groundbreaking accomplishments, as told by his son, a gifted writer and storyteller. Bruce McCandless II, a Navy fighter pilot, joined NASA in 1966. He was Houston’s capsule communicator—the person talking to the astronauts—as Apollo 11’s Neil Armstrong made his giant leap for mankind in 1969. McCandless supported subsequent Apollo flights and developed technology and techniques his fellow astronauts used during the Skylab program, working behind the scenes until he was chosen to ride Challenger into space on the tenth shuttle mission. When he stepped into the cosmos to test the Manned Maneuvering Unit, he became a space flight icon. But the road to that incredible feat was not the sure bet it should have been for such a gifted man. Bruce McCandless II was an astronaut for 24 years, and his story encompasses the development of the space agency itself—the changes in focus, in personnel, in approach, and in the city of Houston that grew up with it. Wonders All Around is more than a catalogue of McCandless’s extraordinary achievements, which included work on the design, deployment, and repair of the Hubble Space Telescope. It is also a tale of perseverance and devotion. Recounted with insight and humor, this book explores the relationship between a father and a son, men of two very different generations. And finally, it is an exploration of the mindset of one unique individual, and the courage, imagination, and tenacity that propelled him and his country to their place in the forefront of space history. From Wonders All Around: "Bruce McCandless turned his Jeep around and screeched out of the cul-de-sac in front of our house for the ten-minute drive to the space center. The moon, a waxing crescent, was standing thirty degrees above the western horizon, and my father slipped into a sort of reverie as he sped toward it on NASA Road One. The moon floated serene and imperturbable in front of him like a black-and-white photograph of itself, Earth’s gravitational remora, her pale silent sister, movie star and legend, goddess and mirage. Bruce McCandless had just turned thirty-two. He was an engineer, a true son of science, a distant nephew of Sir Isaac Newton. He knew the formulas required for achieving orbital velocity, could tell you the fuel mixtures you needed, the stages and timing of rocket-booster separations. He brushed sentiments away like so many spider webs. But even he was having trouble believing that human beings—his colleagues and friends—were up there in the sky, getting ready to do something no one had ever done before. He was going to be part of it. He would be talking to two men as they walked on the moon. The young astronaut hadn’t quite reached his lifelong goal of touching the lunar surface, but he was close. He was almost there. He could feel it." 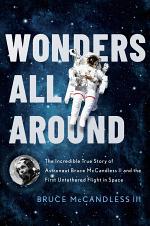 Authors: Bruce McCandless III
Categories: Biography & Autobiography
The Man You Never Knew You Knew It’s one of the most powerful and popular images in the history of space exploration: an astronaut in a snow-white spacesuit, untethered and floating alone in an expanse of blue. Bruce McCandless II is the man in that spacesuit, and Wonders All Around:

Authors: Bruce McCandless III
Categories: Biography & Autobiography
The Man You Never Knew You Knew It's one of the most powerful and popular images in the history of space exploration: an astronaut in a snow-white spacesuit, untethered and floating alone in an expanse of blue. Bruce McCandless II is the man in that spacesuit, and Wonders All Around:
Language: en
Pages:

Beneath an Ominous Sky

Authors: Bonnie Atteridge, Paula Boer, Rhonda Casey, Louise Falcioni, Rosemary Francis, Sharon Halliday, Gary Keady, Linda Kennington, Arlene Liang, Jennie Marie, Suzanne Newnham, Rosie Toth, Judy Turner, Laura Tyler, Anke Ziergiebel
Categories: Biography & Autobiography
The unprecedented bushfires of 2019-2020 Black Summer had a deep impact on all who witnessed and survived them. The stories in this anthology are from the heart. and are only a few of the thousands who suffered the fear and loss throughout the Summer of 2019/2020 not only on the