Learn NativeScript to build native mobile applications with Angular, TypeScript, JavaScriptAbout This Book* Power packed hands-on guide to help you become pro-efficient with NativeScript* Harness the power of your web development skills with JavaScript and Angular to build cross-platform mobile apps* Create highly maintainable and feature-rich apps with TypeScript and NativeScript APIsWho This Book Is ForThis book assumes you have a general understanding of TypeScript, have heard of NativeScript and know what it's about, and are familiar with Angular (2.0). You don't need to be an expert in any of these technologies, but having some sense of them before reading is recommended this book, which is ideal for intermediate to advanced users.What You Will Learn* Bootstrap a NativeScript for Angular app* Best practices for project organization* Style your app with CSS/SASS* Use Angular together with NativeScript to create cross-platform mobile apps* Take advantage of powerful Angular features, such as Dependency Injection, Components, Directives, Pipes, and NgModules right within your NativeScript apps*Gain insight into great project organization and best practices*Use Objective C/Swift and Java APIs directly from TypeScript*Use rich framework features and third-party plugins*Style your app with CSS/SASS*Integrate @ngrx/store + @ngrx/effects to help with state management*Test your app with Karma and AppiumIn DetailNativeScript is an open source framework that is built by Progress in order to build truly native mobile apps with TypeScript, JavaScript or just Angular which is an open source framework built by Google that offers declarative templates, dependency injection, and fully featured modules to build rich applications. Angular's versatile view handling architecture allows your views to be rendered as highly performant UI components native to iOS and Android mobile platforms. This decoupling of the view rendering layer in Angular combined with the power of native APIs with NativeScript have together created the powerful and exciting technology stack of NativeScript for Angular.This book focuses on the key concepts that you will need to know to build a NativeScript for Angular mobile app for iOS and Android. We'll build a fun multitrack recording studio app, touching on powerful key concepts from both technologies that you may need to know when you start building an app of your own. The structure of the book takes the reader from a void to a deployed app on both the App Store and Google Play, serving as a reference guide and valuable tips/tricks handbook.By the end of this book, you'll know majority of key concepts needed to build a successful NativeScript for Angular app.Style and approachThis step-by-step advanced tutorial focuses on the key concepts you need to know to build a NativeScript for Angular mobile app for iOS and Android. 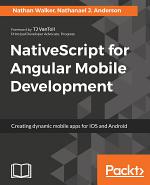 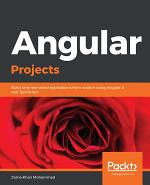 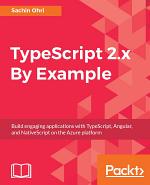 Authors: Sachin Ohri
Categories: Computers
Leverage the power of Typescript 2.0 using real-world examples About This Book Begin with the fundamentals of TypeScript and learn how to write better JavaScript code Build three amazing applications throughout the book Leverage the power of tools such as Angular 2 and NativeScript to build for the web as 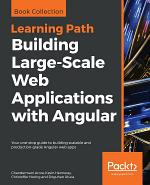