The author's annual letters to the stockholders of Berkshire Hathaway are edited to present the main themes regarding business, investing, price, value, corporate governance, and other important topics.

As in previous editions of The Essays of Warren Buffett, this one retains the architecture and philosophy of the original edition but adds selections from Warren Buffett's most recent annual shareholder letters. All the letters are woven together into a fabric that reads as a complete and coherent narrative of a sound business and investment philosophy. As an aid to all readers, and to enable readers of the previous editions to see what is new in this one, a disposition table at the end of the book shows the various places in this collection where selections from each year's letter appear. Footnotes throughout indicate the year of the annual report from which essays are taken. To avoid interrupting the narrative flow, omissions of text within excerpts are not indicated by ellipses or other punctuation. This new edition is called for not because anything has changed about the fundamentals of Buffett's sound business and investment philosophy but because articulation of that philosophy is always delivered in the context of contemporary events and business conditions so periodic updating is warranted to maintain its currency 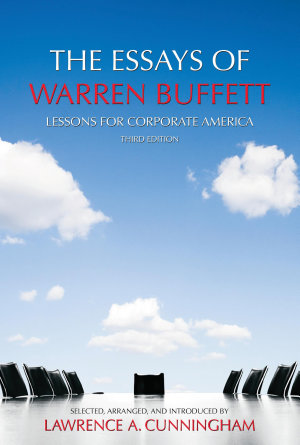 An updated edition of the bestselling collection of timeless wisdom from the world′s greatest investor Readers of Warren Buffett′s letters to Berkshire Hathaway shareholders have gained an enormously valuable informal education in the art of investing. Broad in scope and long on wisdom, Buffett′s letters explain his principles on sound investing, selecting managers, valuing businesses, using financial information profitably, and other vital topics for investors. This newly updated Fourth Edition includes Buffett′s latest wisdom on such topics as the financial crisis, the housing bubble, corporate governance, Berkshire Hathaway′s acquisition of Burlington Northern Santa Fe, the role of oversight in heavily regulated industries, today′s best investing opportunities, and the weaknesses of popular option valuation models. Features investing advice in plain English from one of the world′s most legendary investors Includes Buffett′s insights on the current financial crisis and recession Offers new and potent insight on good corporate governance and other issues vital to executives and managers For investors, corporate executives, managers, and Buffett fans, The Essays of Warren Buffett, Fourth Edition features the kind of wisdom on investing, finance, and leadership that can be found nowhere else. 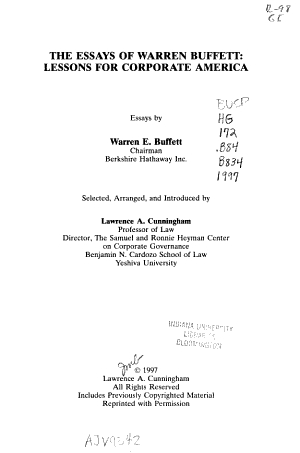 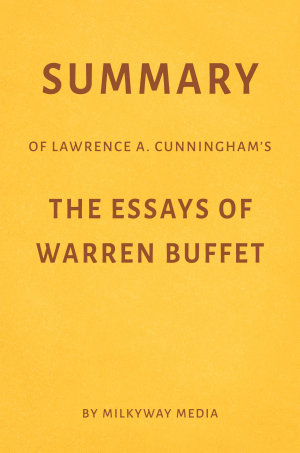 GET BOOK
Summary of Lawrence A Cunningham s The Essays of Warren Buffett by Milkyway Media Book Description:

When one of the richest men in the world offers you free advice, it pays to listen. The Essays of Warren Buffett: Lessons for Corporate America (1997), edited by Lawrence A. Cunningham, consists of edited excerpts from Buffett’s annual letters to investors at Berkshire Hathaway Inc., his holding company, dating from 1984 to 1996… Purchase this in-depth summary to learn more.

The Oracle Speaks Warren Buffett In His Own Words 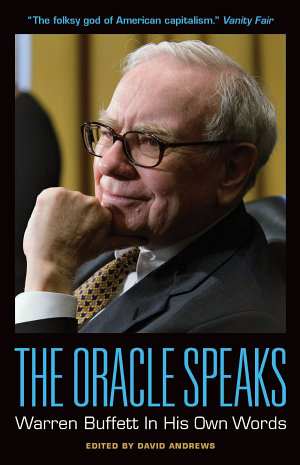 GET BOOK
The Oracle Speaks Warren Buffett In His Own Words Book Description:

From his office in Omaha, Nebraska, without even the benefit of a computer, Warren Buffett has racked up an investment record that far surpasses his counterparts on Wall Street—or anyone else in the world, for that matter. While traditionally stock exchanges have returned about 11 percent annually in the past half century, Buffett's investments have by nearly 29 percent a year, solidifying Buffett's conglomerate holding company, Berkshire Hathaway, as the eighth-largest business in the world and netting him $44 billion along the way. Despite this tremendous success, “the Oracle of Omaha” remains modest. He acknowledges that he has a unique ability to evaluate businesses, but he doesn’t feel entitled to the vast wealth that ability has earned him. Instead, he likes to say that he was born at the right place and time. This humility in the face of proven talent and innumerable wealth is part of what makes Buffett universally popular—he is one of the world's wealthiest men and yet he is still personable and relatable. For the first time, the most thought-provoking and inspiring quotes from Buffett are now compiled in a single book. The Oracle Speaks: Warren Buffett in His Own Words is a comprehensive guidebook to the inner workings of the Berkshire Hathaway chairman. Hundreds of Buffett's best quotes, comprising thoughts on investing, Wall Street, business, politics, taxes, and life lessons, will provide the most intimate and direct look into the mind of a modern business icon and give readers enough counsel to last a lifetime. Media outlets, financial advisers, politicians, and Americans from Main Street to Wall Street hang on every word Buffett speaks, hoping to gain valuable insight into Buffett's investments and successes. There is possibly no greater stamp of approval in the business world than to have Buffett invest in a company, and few leaders in the course of history have commanded such universally agreed-upon respect. Even beyond his business savvy, Buffett is influential as a progressive thinker and active philanthropist, having pledged to give most of his money to charity through the Bill and Melinda Gates Foundation as well as foundations run by his three children. It is this humility that consistently draws people to Buffett, and will draw people to The Oracle Speaks. Most recently, inspired by Buffett's New York Times editorial in which he claimed he paid too little in taxes, President Barack Obama and Congress have named a series of tax reforms after Buffett. While the political implications have been controversial, Buffett has retained his reputation as an outspoken and successful business leader. The Oracle Speaks draws from decades of interviews, editorials, and annual shareholder reports, amassing the most complete outline of how Buffett believes a good business is run and a good life is led. It's advice that Buffett has successfully adhered to throughout his 80-plus years, and it is advice now available in the succinct, poignant, gift-friendly package of The Oracle Speaks.

Introduction to the Essays of Warren Buffett

GET BOOK
Introduction to the Essays of Warren Buffett Book Description:

This Professor Cunningham's Introduction to his edited collection of Warren Buffett's noted letters to shareholders of Berkshire Hathaway Inc. The collection was prepared for a symposium held at Cardozo Law School in New York City in 1997 and originally published in the Cardozo Law Review. The Introduction serves as an encapsulation of the main themes of the resulting collection and locates them in contemporary discourse on matters of corporate governance; corporate finance and investing; mergers and acquisitions; and accounting and taxation. Professor Cunningham subsequently published the edited collection as a book under the title The Essays of Warren Buffett: Lessons for Corporate America, which also contains this Introduction. 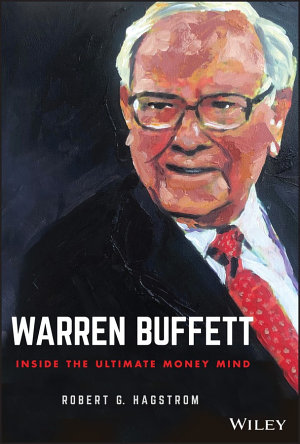 In Warren Buffett: Inside the Ultimate Money Mind, Hagstrom breaks new ground with a deep analysis of Buffett’s essential wisdom, an intricate mosaic of wide-ranging ideas and insights that Buffett calls a Money Mind. What exactly is a Money Mind? At one level, it’s a way of thinking about major financial issues such as capital allocation. At another level, it summarizes an overall mindset for successfully investing in today’s fast-paced stock market, a mindset that depends on a commitment to learning, adapting, and facing down irrelevant noise. This is not a method book. It is a thinking book. Warren Buffett: Inside the Ultimate Money Mind explains the philosophies of self-reliance, stoicism, rationalism, and pragmatism and their contributions to making intelligent investment decisions. It also outlines the evolution of value investing, discusses how to develop a business-driven investing mindset, and describes the defining traits of successful active management. Lastly, it examines the surprising aspects of a Money Mind – sportsman, teacher, and artist. In short, Warren Buffett: Inside the Ultimate Money Mind helps readers understand the building blocks that go into making a Money Mind so they can begin to incorporate its principles in the service to a life of value. Testimonials “An erudite masterpiece…” –Lawrence A. Cunningham, author; professor and director, Quality Shareholders Initiative, George Washington University “It’s another must-read…” –Bethany McLean, journalist and Contributing Editor, Vanity Fair, author, Saudi America and co-author The Smartest Guys in the Room “Pure Genius! This is a game changer in investment books…” –Robert P. Miles, author; Executive in Residence, University of Nebraska at Omaha, Executive MBA Program, "The Genius of Warren Buffett" “Effervescence and thoughtful analysis of Buffett’s life and work…” –Tom Gayner, Co-chief Executive Officer, Markel Corporation “Hagstrom’s books always enable readers to think about the world in new ways…” –Tren Griffin, author, Charlie Munger: The Complete Investor 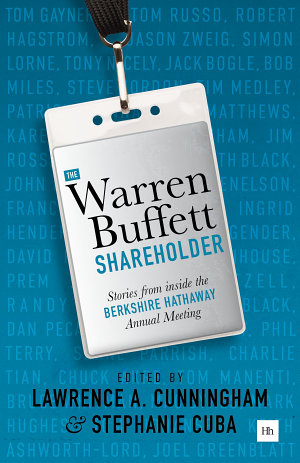 In this engaging collection of stories, 43 veterans of the Berkshire Hathaway Annual Shareholders Meeting explain why throngs attend year after year. Beyond the famous Q&A with Warren Buffett and Charlie Munger, these experts reveal the Berkshire Meeting as a community gathering of fun, fellowship and learning. The contributors whisk readers through the exciting schedule of surrounding events--book signings, panel discussions and social gatherings--and share the pulse of this distinctive corporate culture. Spanning decades, the book offers glimpses of the past and ideas of what lies ahead. To learn about what makes Buffett’s shareholders tick and all the happenings at the Berkshire Meeting, and to reminisce about past Meetings, make this delightful book your companion. Includes work by these bestselling authors: - Robert Hagstrom - Robert Miles - Jason Zweig - Joel Greenblatt - Vitally Katsenelson - Jeff Matthews - Charlie Tian - Whitney Tilson - Prem Jain - Karen Linder